Hi, I'm Robyn O'Connell, the founder of the Rebecca Jane Foundation and Becky's mum. Let me tell you about my special angel. 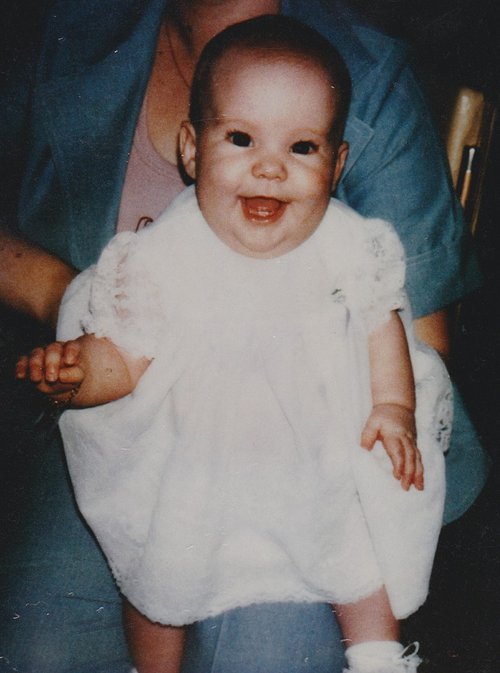 Becky was a beautiful bonnie baby, who was born at the Mercy Hospital. At birth she was diagnosed with a condition called spina bifida[1] and was immediately taken to the Royal Children’s Hospital in Melbourne where she was operated on within hours of her birth. 10 days later, a shunt was inserted as she had developed hydrocephalus[2]. Her life was a series of hospital visits as Becky was under five doctors at the RCH, a neurologist, a urologist, an orthopaedic surgeon, a paediatrician, as well as a type of general doctor, who all the doctors gave reports to and had the arduous task of trying to make it all make sense to her family!

Yet despite all this, Becky remained the happy and adored child she was. She grew so quickly and did all the usual things that babies do, like keeping her parents up all night while teething, giving great joy with those first words, sitting up (albeit a little later than normal) and growing more beautiful by the day.

At about nine months of age, the shunt in Rebecca's neck snapped and she had to go into the Royal Children's for a repair. A visit to 9 West the Children's neurological ward, certainly made you realise the fragility of life! They used to put all age groups together up to 14 so that it felt more like a family situation. It was a place full of tragic stories! I recall a little boy in there who was unable to move or speak – he was conscious but that was about all. He had simply been walking along a small brick fence (about two feet high) and fell and hit his head – so easily done, just simply a tragic accident. The neurological ward in any children's hospital is certainly a place that is a testament to how precious our children are.

On June 3rd, 1979 – at 9 months, 3 weeks and 5 days, the unspeakable happened. Becky’s life ended. Had she been well, I would have got up in the morning and found her dead in her cot, but because of the spina bifida and the fact that she had been vomiting, I was concerned about her dehydrating, I wanted to try and get her to have a drink, so she was up, if not a little sleepy. After a little while, she fell asleep and when we couldn’t rouse her properly, I called an ambulance, but the time they arrived, she was having mouth to mouth, as she was no longer breathing.

After a rush trip to Box Hill hospital, Becky was then transferred to the Royal Children’s where all her records were. After trying for several hours, they gave us the devastating news that she would not survive! This is not how it is meant to be! Your child is meant to outlive you, not the other way around. What followed was something akin to a nightmare, we had never had to organise a funeral before. We were interviewed by the police, this poor young constable who I’m sure would have never forgotten that interview. Yet I was surprisingly calm....I was still in shock.

Our parish priest came along like a beacon in the darkness and told us not to worry, the church would pay for everything to do with the funeral, I felt like I was being given a gift of a million dollars. I have never forgotten that kindness, it has and will stay with me forever and I want other parents, in a similar situation, to experience that feeling too. While it might have taken 39 years to happen, this is why the foundation was started.

We were a young couple, with nothing and while our priest knew us, his act (along with the parish council) of paying for Becky’s funeral meant we didn’t have to go asking people for a loan. Actually the thought of going to a bank didn’t even cross our minds and we knew our parents didn’t have the money.

Ultimately, it would be three weeks before we found out that Rebecca had died from Sudden Infant Death Syndrome, basically unknown cause, in those days it was called ‘cot death’. The reason it took so long was because of her spina bifida, they were looking for reasons associated with that, and of course that she had been unwell that day, which turned out to be nothing but an upset tummy.

What I found remarkable, was no one knew what to do, what to say to us and many just avoided us altogether. What I now know is that there is nothing you can say, nothing you can do, except to just be there and if words fail you, a hug works just as well!

Becky is still part of my life, she is still my daughter and while I never ‘got over’ her death, I have learnt to live with it and yes, it is still part of me (although without so much of the pain and sorrow) and I’m eternally grateful for the precious lessons her life (and death) taught me:

I am hoping that by bringing Becky's story to the public that it will raise awareness that even though my daughter died 39 years ago, she is still very much part of my life. I hope that people might start the conversation with someone again about a baby that was born too soon or had to leave before it had a chance to grow. 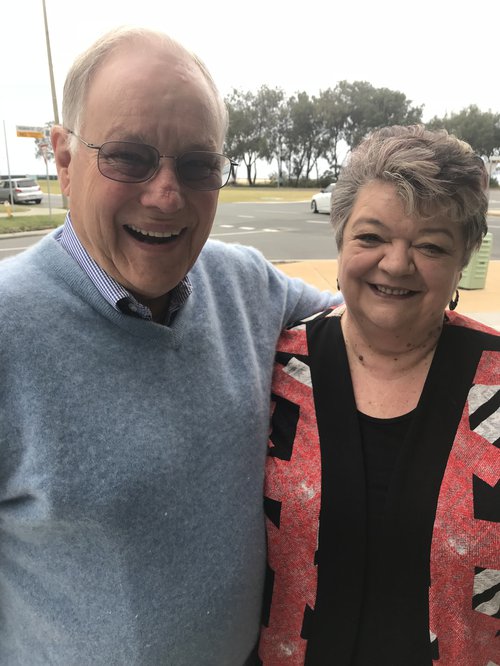 Only in the last couple of years, I found out that someone had remembered Becky's birthday every year, I wish I had of known that, for more years than I care to remember I thought no one remembered it. So please start the conversation, regardless of whether it was years ago or just recently, ask questions, my guess is that you probably don't realise how much it would mean to someone for you to do it.

In June this year, I was able to travel to Queensland to meet up with Fr. Nick Punch O.P., we hadn't seen each other for 38 years. He is really the person who started all this, because if it wasn't for his kindness, I would not be wanting to pay it forward so many years later. This photo sums up our whole time together, we spent an hour just smiling - it was one of life's most beautiful moments, we have promised to keep in touch!

Fr Nick believed that a family had endured enough of a burden in their child dying without having to suffer financial hardship as well. I can tell you, I was not the only recipient of his kindness. I was surprised when we first corresponded that he said how proud he was of me for starting the foundation. But if it wasn't for his act of kindness and consideration for a young family...

Thank you for your interest, thank you for reading Rebecca Jane's (and my) story and I hope that you too will support us in giving that gift to others.

The launch date of August 7th, 2018, was chosen because it's the day that would have been Rebecca Jane’s 40th birthday. I hope that by her 50th, the Rebecca Jane Foundation will be a household name and thousands of families will have benefitted from it. In fact:

It is my hope that Becky’s legacy, will live forever.

[1] Spina bifida - a condition where the spine doesn't fuse and nerves escape out into a bulge on the back.

[2] Hydrocephalus - more commonly known as fluid on the brain.